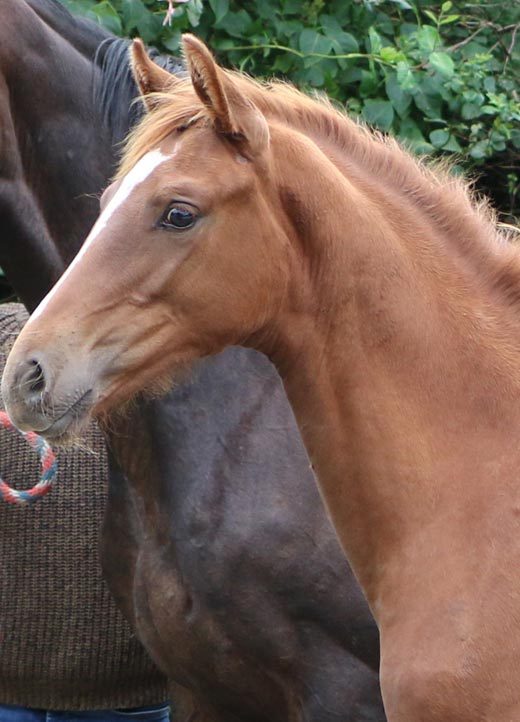 An exceptionally beautiful filly by the very impressive young Helgstrand stallion VALVERDE. VIVA has an exciting pedigree with the huge talent of her sire combined with the beautiful and trainable FURSTENBALL and the power of the incomparable DON SCHUFRO. She is a very refined modern model with exemplary movement. From a tiny foal she has always impressed us with her natural boldness and wish to engage with people.

VALVERDE’s first foals have exceeded the highest expectations. Valverde produced numerous show winners and coveted auction foals He is always impressive with incredible shoulder freedom and activity which he passes on to his foals. He is relaxed and swinging in his body with a positive expression.

“We have seen a horse with outstanding movement quality here,” the judges commented enthusiastically on the presentation of Valverde in 2019 at the German Championships for five-year-old dressage horses. The judges gave 9.5 for his ground-covering walk with “excellent stretching” and for his canter. He received 9.0 for his trot, demonstrating swing, elasticity and power for the hindquarters, and for submission. The general impression was marked 9.5. “The stallion has already showed his talent for collection.” Overall score: 9.5. Valverde started his career in 2016 as Westphalian Champion Stallion and the following year completed his stallion performance test in Denmark as the third best dressage stallion with a total score of 9.23 (10.0 for walk, character and conformation). Ridden by Eva Möller, Valverde won the gold medal at the Westphalian Championships and the silver medal at the four-year old German Championships. In 2019, before his victory at the German Championships, he won the Westphalian Championships again and came fourth at the World Championships for young dressage horses with 9.22 (10.0 for walk).

FAIR CALEDONIA (FAIRY) Our beautiful Fairy is by the famous stallion FURSTENBALL and out of DONNER DAYLIGHT whose father is BLUE HORS DON SCHUFRO, a competition and breeding legend.
Her grandmother, WALESKA, who carries the wonderful blood of the famous and influential stallion, WERTHER, was a full sister to the stallion WERTHER’S AS. Fairy’s mother’s Sir Donnerhall sister, Suilven, was mare Champion at the British Warmblood Breeder’s show and on the Lottery Funded World Class training programme for horses with International Potential.

Please feel free to contact us for more information on “Viva Caledonia”, and we will reply as soon as possible.