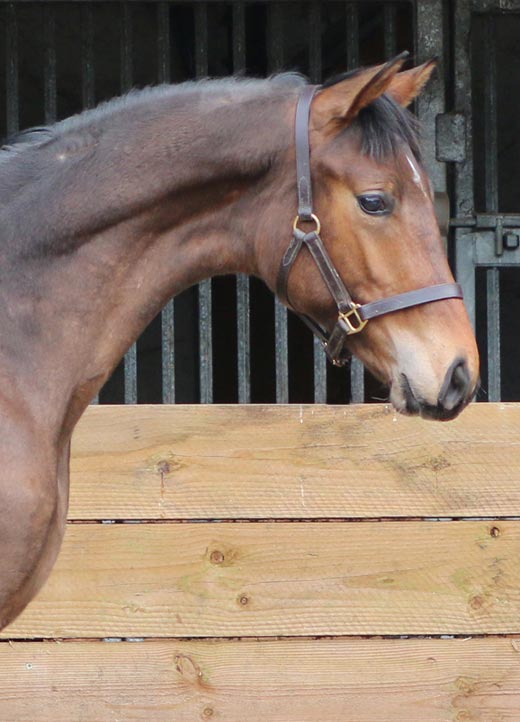 Another outstanding foal. This colt has exceptional type and presence. He is by the young stallion sensation Santo Domingo, who owes so much of his quality to his sire San Amour. He is out of imported mare by the stallion of the year Londonderry. Argentan, who was also stallion of the year, in the third generation introduced jumping blood and power in the hindleg so evident in this colt.

His mother Annabella is a lovely mare by the stallion of the year LONDONDERRY from a family littered with State Premium mares and renowned for their beauty. Found for us by Christian Heinrich, she is closely related to Grand Prix competitor WILLY THE KID and Licensed stallion WUNSCHTRAUMER.

LONDONDERRY HANOVERIAN STALLION OF THE YEAR 2013

Londonderry has over 2000 registered offspring of which 527 mares are entered in the Hanoverian mare book and 185 are state premium. The chestnut sired 33 Hanoverian licensed sons, including licensing champion Liberty Gold. Londonderry’s licensed offspring Lemony’s Nicket achieved the record auction price of 900,000 euro and was one of already 195 offspring sold at auction. Londontime sold for 510,000 euro.

ARGENTAN HANOVERIAN STALLION OF THE YEAR 1994

In the next generation, Argentan introduces jumping blood and the power in the hind leg. Argentan was one of the most important founding sires of the modern Hannoverian. Argentan was Reserve Champion of his stallion licensing.

In 1994 he was crowned Hannoverian Stallion of the Year as a result of his extraordinary success as a sire. Argentan was the sire of 805 competition horses who won a total of DM1,648,638. His broodmares in particular were highly regarded and included three Champion German Riding Horse mares at the DLG show.

He was the sire of 19 stallion sons most famed of which Argentinus.

Please feel free to contact us for more information on “Santo Caledonia”, and we will reply as soon as possible.