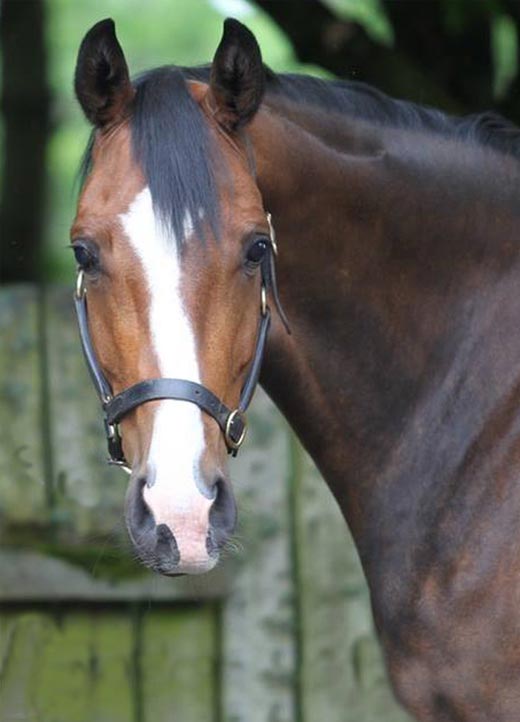 Our beloved LOVE STORY STAR is as charming as she is beautiful. Her foals inherit her immense quality and have sold to international riders in both UK and Europe.

From the famous LOVE STORY family, she is a direct daughter and granddaughter of champion mares. Her sire is the sensational double WORLD CHAMPION, FLORENCIO.

Her sire, the double WORLD CHAMPION, FLORENCIO created a sensation in his short life and swept everything before him.

Florencio began his sport career as a 4-year old and was the reserve champion at the 2003 BUNDESCHAMPIONAT. In 2004, Hans Peter Minderhoud took over the ride and caused a sensation when he won the WORLD YOUNG HORSE CHAMPIONSHIPS in Verden with a record score of 9.8. They won the PAVO CUP Finals a few weeks later and reclaimed the World Championship title the following year!

Florencio produces offspring with enormous presence, three outstanding paces. His most notable stallion sons are Floriscount, whose first crop of foals dominated the German auctions, including the top lot at Vechta, and Charmeur, the Dutch five-year-old champion. He has numerous offspring competing at Grand Prix.

Florencio is undoubtedly a great gain for the dressage breeding. His unbelievable beauty in conjunction with his naturally light-footed, uphill movements makes him a revelation to every dressage lover. Florencio is a stallion who is bred for dressage from the cream of the crop of stud stallions

His outstanding paces earned him a score of 10 for his walk at his performance test, with a 9.2 for canter and a 9.5 for trot

His Sire FLORESTAN has cemented the reputation of Furioso II as a progenitor for dressage horses, and has been inside the top ten of the WBFSH Sire Rankings for eight consecutive seasons. His licensed sons include Fidermark, Fürst Heinrich (sire of double World Young Horse Champion, Woodlander Farouche), Freestyle and Flores.

His Damsire Weltmeyer won his licensing, his performance test, and was Stallion of The Year 1998.  He has over 70 licensed sons, and his high Breeding Index (152) from the German Equestrian Federation comes with a 99% reliability coefficient.

In Foal to Jameson R32

Please feel free to contact us for more information on “Love Story Star”, and we will reply as soon as possible.