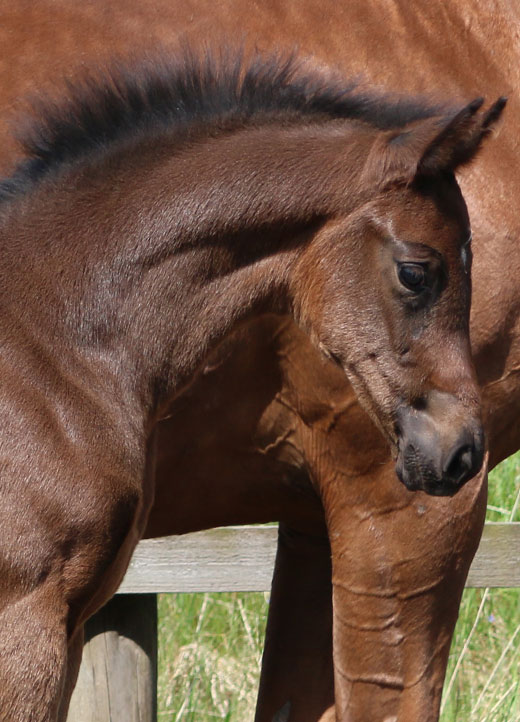 We are in love with this spectacular filly who is everything we hoped for in this special pairing of the breeding royalty of LORETTA and the foal maker FOUNDATION. This filly has the most outstanding movement with elasticity which allows her to move harmoniously right through her body.

We are in love with this spectacular filly who is everything we hoped for in this special pairing of the breeding royalty of LORETTA and the foal maker FOUNDATION. This filly has the most outstanding movement with elasticity which allows her to move harmoniously right through her body.

A direct granddaughter of the famous LORETTA, she represents an incredible and rare opportunity as a breeding and competition prospect.
She is from breeding royalty and is out of LORETTA LIVE, one of the last remaining daughters of the famous LORETTA, the breeding legend who is the mother of SANDRO HIT and DIAMOND HIT. Uniquely, these two famous stallions ranked in the World Breeding top ten stallions.
LORETTA is one of the most influential mares in the history of warmblood breeding.

We are so privileged to own our amazing mare LORETTA LIVE. Her son SUPER MARIO is competing Internationally successfully at Grand Prix with Marianne Helgstrand of Helgstrand Dressage.
The foals of our wonderful LORETTA LIVE are simply world class and have sold to top international homes in Germany, Denmark, USA and England.

We love FOUNDATION and believe he is creating a dynasty of his own with the success of his offspring. He is now confirmed at Grand Prix with his rider Matthias Alexander Rath and we look forward to their great success in the future.
FOUNDATION is a large-framed, immensely powerful stallion who is incredibly supple with elastic, uphill, and ground covering paces. The mechanics of his gaits are exquisite At his performance test, he scored a 10 for both his trot and his canter.
20 of his sons have been licensed in the meantime, part of them was also nominated premium stallion. Foundation has already been delivering a number of highly-placed finalists at Federal Championships. Ferrari OLD was the 2016 Oldenburg champion of four-year-old stallions in Rastede and with 1.5 million Euro most expensive horse and price record holder at the PSI Auction. He won the vice world championship-title in the division of five-year-old dressage horses in Ermelo/NL one year later. Daughter Feel Free OLD was awarded the Ic-prize in the brilliant ring of the 2016 Oldenburg Elite Mare Show, she won the vice Federal Championship-title in the division of four-year-old mares and geldings in Warendorf in 2017, finished fourth in the five-year-old dressage horse class one year later and was placed in the final of the World Championships in 2019. Foundation confirmed his top position in the FN Breeding Value Estimation one more time in 2019 when he occupied one of the top places Germany-wide with 153 points.

Please feel free to contact us for more information on “Lady Loretta Caledonia”, and we will reply as soon as possible.