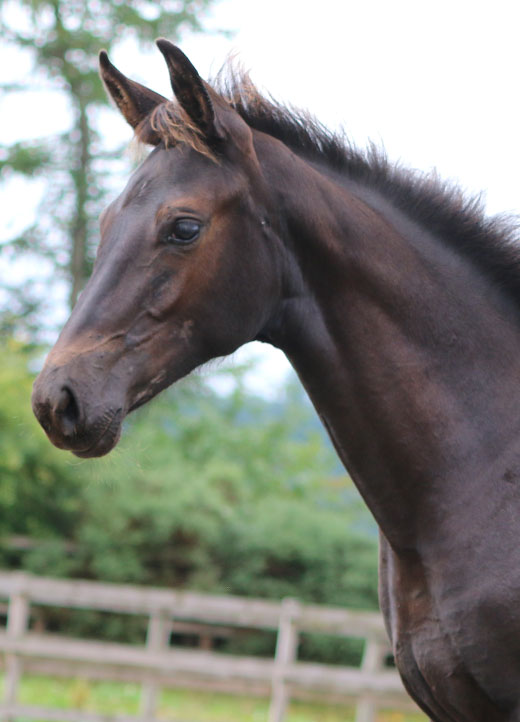 An exciting filly from the famous motherline  of the legend that is VALEGRO. This is a daughter of the UTHOPIA daughter of VALEGRO’S full sister WEIDYFLEUR II.  Her sire LORD LEATHERDALE is the sire of the World Champion GLAMOURDALE and is famous for crossing so well with Negro and Ferro.

This filly is totally charming and looks more than a bit like a girl version of VALEGRO himself. Built for Grand Prix and with a personality to match. Athletic, charismatic and beautiful. This pearl is most exciting prospect for breeding and competition.

We are so lucky to have a mare like U DANCING in our breeding programme. She is a daughter of WEIDYFLEUR II who is one of only two full sisters of the legend VALEGRO. She is the mother of the impressive stallions U GENIUS (full brother to U DANCING), INTEGRO and DON VALEGRO. All are showing exciting potential under saddle.

UTHOPIA Team gold medal at the London 2012 Olympic Games where Carl and Uti finished in the top five of the three tests to play a vital role in the historic medal. Team bronze followed the next year at the European Championships in Denmark with Carl producing a ‘captain’s performance’ with Uti.

LORD LEATHERDALE is an honest, diligent and reliable stallion. Sire of the extraordinary Glamourdale the 2018 World 7 yo Champion.

Please feel free to contact us for more information on “Lady Fleur Caledonia”, and we will reply as soon as possible.