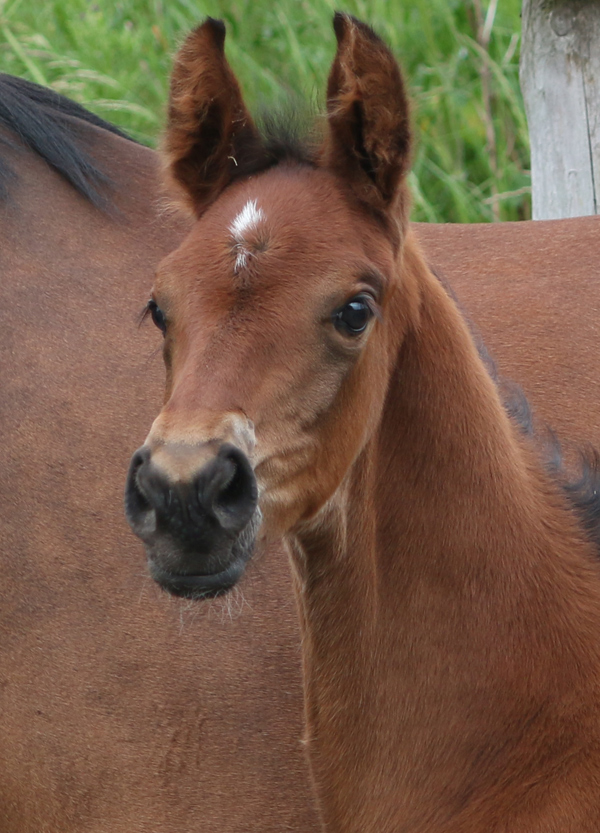 This is a worthy son of the great champion JOVIAN and we are very excited about him.

At four weeks old, he is tall uphill oozing presence, loose moving with power and elasticity. We love this big boy. He has a charming engaged and bold temperament. An absolute delight. We think his future is very bright.

His sire Apache was the KWPN Reserve Champion in ‘s-Hertogenbosch/NED and outstanding winner of the stallion competition.

JESTER’s mother FURSTIN PRESSIONS is a rare and precious daughter of the sensational stallion, FURST HEINRICH who was well on his way to stardom before his life was sadly cut short at age seven. Awarded a Premium Stallion at the NRW Licensing in 2000, he then went on to become Champion of his Performance Test in Münster-Handorf with a Dressage score of 8.82. In 2002 he was a Main Premium winner at Oldenburg. Qualifying for the Bundeschampionship with a score of 8.5, he then competed successfully in his class and came 2nd in the Final.

As a five year old in 2003 he was crowned World Dressage Champion,

FURSTIN PRESSIONS is the mother of double National Champion and 2016 Olympic Para reserve SWEET CALEDONIA, ridden by Natasha Adkinson. She was Paralympic Reserve for Rio having been on Lottery Funded World Class training programme for horses with International Potential and has represented Britain from the age of six!

FURSTIN PRESSIONS’ dam is a full sister to the grand dam of DER CLOU and the beautiful licensed stallion SAN BERNADINO. The international Grand Prix stallion DER CLOU competed for the Portuguese team in the World Equestrian games 2014 and the 2015 Europeans ridden by the Portuguese rider Filip de Cantelas Pinto. This damline has brought sport horses in both disciplines successful up to Grand Prix.

Please feel free to contact us for more information on “Jester Caledonia”, and we will reply as soon as possible.