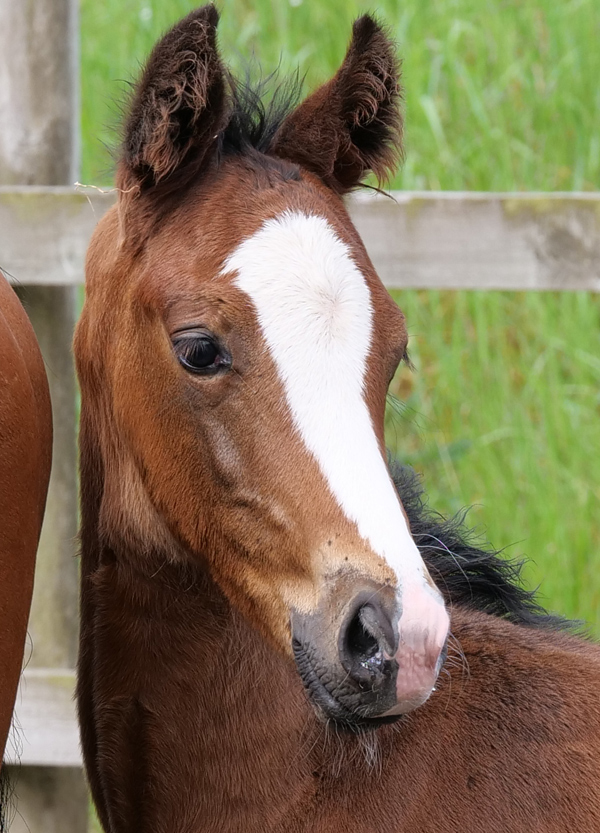 Meet JAGUAR.  PUSSYCAT always produces an athlete, and the combination of her and JAMESON looks pretty spectacular. Like his father, he is built uphill with a fantastic canter and trot. He has inherited PUSSYCAT’s outstanding walk and the most beautiful head.  He has the most charming, bold, enthusiastic, delightful temperament which will make him a rewarding and trainable competition horse who will be huge fun to own.

JAMESON RS2 is an honest, sensible stallion with a work ethic and positive work attitude according to the KWPN Breeding advice

As three-year-old, Jameson RS2 won the Championship at the Den Bosch Stallion Inspection and selected for the KWPN performance test, after which he wrote his name on the Pavo Cup with Marieke van der Putten.

His father is Blue Hors Zack (v. Rousseau) who also was the Champion at Stallion Inspection.

He is also the sire of the triple world champion Sezuan who has also been a sire of his own dynasty of successful horses both in competition and breeding. Successful in his ridden career,  Zack can call himself the best active breeding stallion of the Tokyo Olympic Games!

PUSSYCAT is a very pretty, athletic mare by the influential PRINCE THATCH xx who brought type and quality to his offspring. Pussycat is renowned for producing foals of great quality.

This is no surprise as Pussycat is from a renowned mother line, which has brought great horses to the dressage world. From her direct motherline is the stallion QUATERGOLD currently winning at the famous Koschell stable in Germany. QUATERHIT the very exciting young Helgstrand stallion is his son.

Pussycat’s mother, Waleska, is from the mare, Antonia, who together with her mother, Goldbad, and sister, Antoinette, was the second best family in Germany in 1979. Antonia is the mother of Leitsatz and Lummel who were finalists in the Bundeschampionate. She is, also, the mother of the Grand Prix horse WELTALL/ WELTINO ridden by Ellen Schulten-Baumer and the mother of StPrSt Carmina Burana, who was Bundessiegerstute 1998 –the title of German Champion mare.

Please feel free to contact us for more information on “Jaguar Caledonia”, and we will reply as soon as possible.