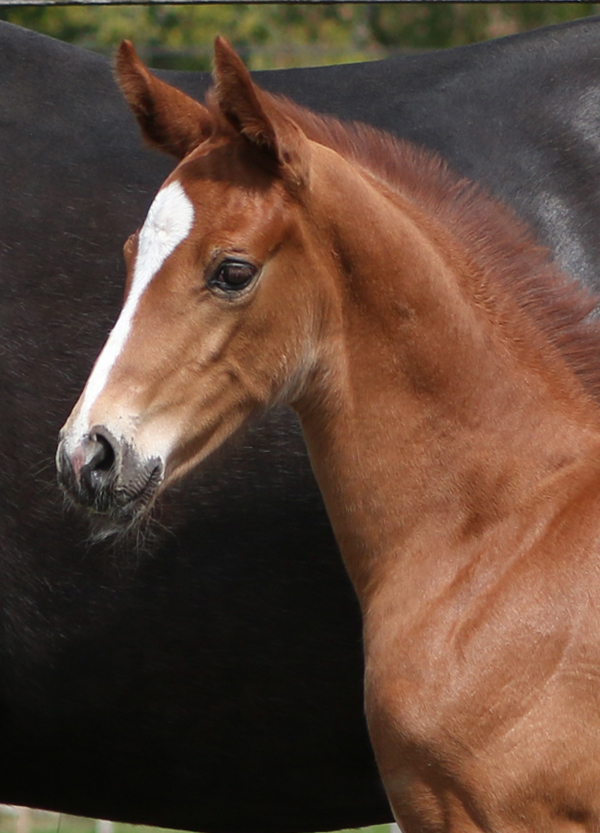 Our golden girl from the golden cross of GRAND GALAXY WIN / DON SCHUFRO. We loved this cross and she had a full blood brother in Germany but Reay’s trip to the 2020 Danish Licensing confirmed our decision with all of the Young Horse Class winners on this special cross. And we were so lucky and surprised to get this golden beauty from her two black parents. We think her future is very exciting.

Ultra-modern, lustrous black y stallion by Apache, the KWPN Grand Prix newcomer. In fact, Galaxy is the first stallion in Denmark by Apache, who had 6 sons selected for this year’s KWPN-licensing. Because of his type and movement, Galaxy is a young stallion with great potential. Galaxy is out of the elite mare Winner T, who is by the Grand Prix stallion and breeding magnate Jazz, and therefore, a full sister to the Prix St. Georges horse Volvo. In the third generation, we find the well-reputed Zeolit, sire of numerous Grand Prix offspring, e.g. Gomerant, Oscar B and Lawoel.
In 2014 Galaxy was awarded champion stallion in DWB. In 2015, he placed 2nd in the 4-year-old final at the Danish championship and participated at the 2016 WCYH. His first offspring have been extremely promising and in 2018 Galaxy has eight sons selected for the DWB’s stallion licensing in Herning.
With his offspring, he immediately made a big impact: from his first crop of foals, he produced Oldenburg Champion Stallion GLOBAL PLAYER (importantly, like this filly, out of a DON SCHUFRO mare), the two premium stallions Hesselhøj Gnags and Giovanni Bell, as well as numerous premium mares, including the Oldenburg “Brillantring” mare Silberlily. His son Highfive Fuglsang won the silver medal at the four-year-old Danish Championships with 9.0.

His foals have been much admired for their uphill tendency and freedom of movement. He provided the winner of the 2018 Oldenburg licensing, Global Player, and his first offspring under saddle are proving to be talented, trainable and rideable with all the potential for the top level work.

Winner of both the A final and B final of the Danish Young Horse Championships in Herning were offspring by Kastel’s Grand Galaxy Win
A final: Grand Galiano by GGW/Don Schufro, ridden by Rikke Dupont
B final: Logo’s Gaya by GGW/Don Romantic ( Don Schufro)ridden by Emma Ahlberg.

DONNER MIDNIGHT is a precious daughter of the famous BLUE HORS DON SCHUFRO, a competition and breeding legend. DON SCHUFRO needs little introduction but his achievements are second to none. He is a living legend who provides top results. His offspring are renowned for fantastic trainability and a superb hind leg. He is the sire of Weihegold, the current world number one who was winner of Rio Olympic team gold and the individual silver medals. Ten years in a row Don Schufro has ranked No. 1 in the breeding value estimation in Germany. Her Grandsire, FRIEDENSHERR, is by WANDERER, giving this mare the same sought ‘after click of DON SCHUFRO and WANDERER as World Young Horse Champion UNO DONNA UNIQUE, DER EURO and many others.
DONNER MIDNIGHT is a ¾ sister to DON CALEDONIA, a double national champion who went with great success to Grand Prix with his international rider Hannah Biggs.
Midnight’s full sister’s much admired daughter, Sugar Plum Fairy (Sir Donnerhall), is Double Regional champion at Novice with scores of over 75%.

Please feel free to contact us for more information on “Goldfinch Caledonia”, and we will reply as soon as possible.