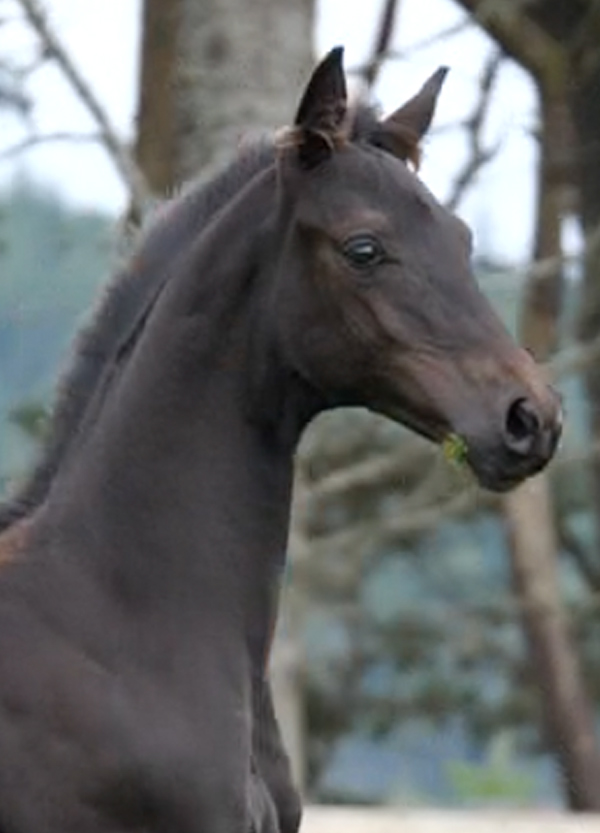 This star is by the sensational 7yo World 2018 Champion stallion GLAMOURDALE ridden by Britain’s Lottie Fry.

His pedigree combines the best of German and Dutch breeding.

His sire is famed for his canter and uphill way of going and this boy has inherited great movement from his father along with a huge self confident character and, indeed, a sense of humour. He is an absolute delight. Infact we have found all our Glamourdale foals to be delightful and talented.

His KWPN Inspection report says so much for his quality and charm.

Glamourdale in 2021 has burst onto the scene of international Grand Prixs with extraordinary score and showing great talent.

DONNER DANCING is a precious daughter of the famous BLUE HORS DON SCHUFRO, a competition and breeding legend. She is one of three DON SCHUFRO daughters bred and owned by Caledonia.

DON SCHUFRO needs little introduction but his achievements are second to none. He is a living legend who provides top results. His offspring are renowned for fantastic trainability and a superb hind leg. He is the sire of Weihegold, the current world number one who was winner of Rio Olympic team gold and the individual silver medals. Ten years in a row Don Schufro has ranked No. 1 in the breeding value estimation in Germany.

Her Grandsire, FRIEDENSHERR, is by WANDERER, giving this mare the same sought after click of DON SCHUFRO and WANDERER as World Young Horse Champion UNA DONNA UNIQUE and many others.

DONNER DANCING is a ¾ sister to DON CALEDONIA, a double national champion who went to Grand Prix with his international rider Hannah Biggs.

Please feel free to contact us for more information on “Glenfiddich Caledonia”, and we will reply as soon as possible.