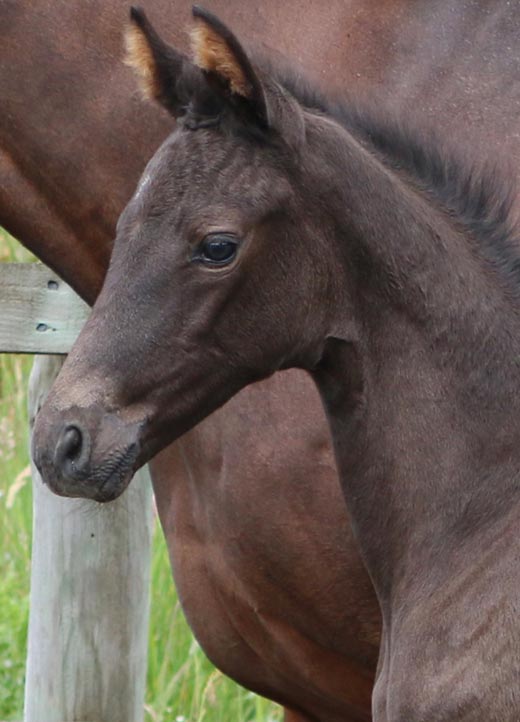 This exquisite and elastic filly is everything we could hope for from such an incredible pedigree. Another moving machine!

Her mother, SUGAR PLUM FAIRY, has captivated us since the day she was born with her great beauty. Plum in her short career has five Regional Championships and was twice a close third at the Nationals with high scores. She has had scores of up to 77%. We are excited about her future and her foals are as beautiful as she is.

Interestingly from a breeding point of view, she is SIR DONNERHALL /DON SCHUFRO. This is the much admired breeding on the bottom line of the pedigree’s of Fascine, For Romance I and II, Feinrich, Dante Jr and Total US. Plum is also the full sister of our much admired Scarlett Caledonia.

Franklin needs little introduction and was the KWPN Champion 2013.

He is a beautiful, modern stallion who combines trainability with performance. Franklin is incredibly uphill, with a hindleg showing abundant power, push and spring. He has a phenomenal, powerful canter, which he passes on to his offspring and has been awarded a score of 10 for his trot and 9.5 for his canter, as well as 9 for rideability. Franklin is a young stallion on whom many people place great expectations. His foals show great potential.

His offspring have inherited his spectacular gaits and great movement, with active hind legs and a strong top line. In the Nordic International sales the top six foals all by Franklin were sold with spectacular prices from 50,000 euro to 115,000 euro. This reflects the immense talent and quality he passes to his foals.

Please feel free to contact us for more information on “Forest Fairy Caledonia”, and we will reply as soon as possible.