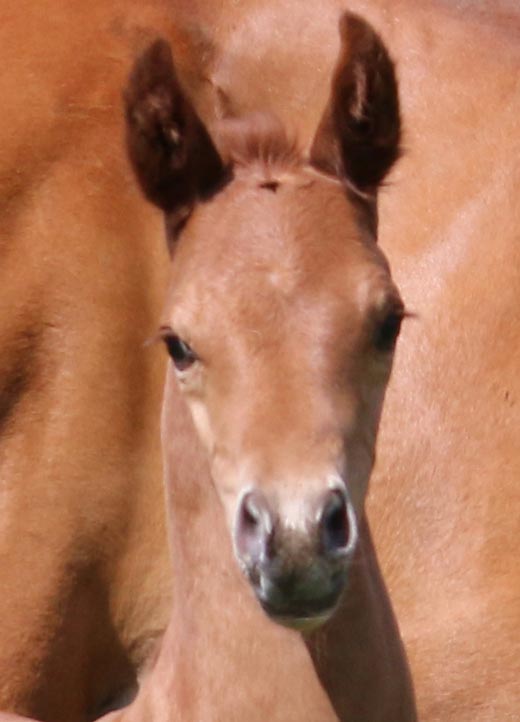 FLYING SCOTSMAN is another of the third generation of our breeding at Caledonia and we are overwhelmed by his charisma, beauty, type, and extravagant movement.

This is first time we have used the great stallion FIDERTANZ and we are delighted with the result. We were lucky enough to get embryo twins and this colt is a full brother to our sensational FLYING SOLO who is sold internationally.

Fidertanz is an incredibly powerful and charismatic stallion known for his exceptional rideability and his outstanding movement. The celebrated 2004 NRW Champion Stallion, Fidertanz dominated his 30-day test in Neustadt-Dosse, and then a year later took the Vice Champion title at the Bundeschampionat in Warendorf, with a score of 9.5 from the guest rider. He is notable in being the sire of the two fantastic stallions FOUNDATION ridden by Matthias Alexander Rath and FRANCIZCUS ridden by Ingrid Klimke.

He is the first colt from our beautiful SUGAR PLUM FAIRY and we couldn’t be more thrilled. PLUM has captivated us since the day she was born with her great beauty. Plum, in her short career has five  Regional Championships  and was twice a close third at the Nationals with high scores. She has had scores of up to 77%.  We are excited about her future and her foals are as beautiful as she is.

Interestingly from a breeding point of view, she is SIR DONNERHALL /DON SCHUFRO.  This is the much admired breeding on the bottom line of the pedigree’s of Fascine, For Romance I and II, Feinrich, Dante Jr and Total US. Plum is also the full sister of our much admired Scarlett Caledonia.

Plum’s mother, DONNER DANCING, is a daughter of the famous BLUE HORS DON SCHUFRO, a competition and breeding legend. She is also a ¾ sister to DON CALEDONIA (Archie), a double National Champion on his way to Grand Prix with his international rider Hannah Biggs.
Archie and Hannah recently won the INTER 1 at the Hickstead Premier League and are trained by the legendary Carl Hester.

Please feel free to contact us for more information on “Flying Scotsman Caledonia”, and we will reply as soon as possible.