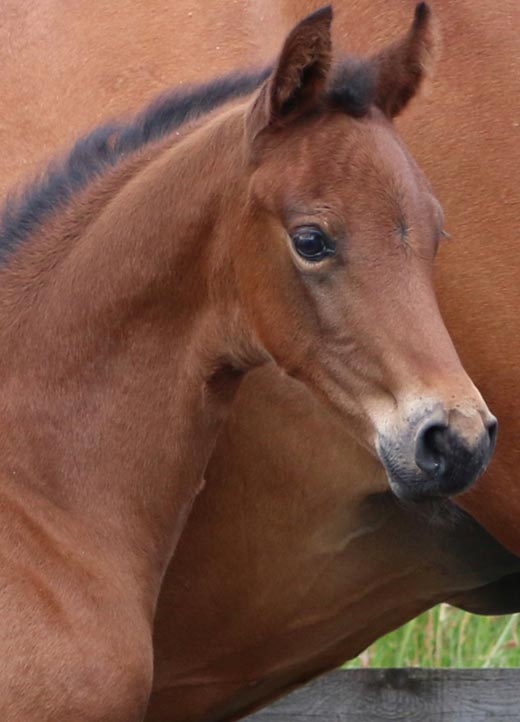 This is a unique colt with a great potential for dressage at top level as well as an obvious stallion prospect. His extraordinary natural presence and powerful, elastic movement demand attention. We are very excited for the future of this fantastic colt.

His mother LORETTA LIVE is breeding royalty. She is the maternal sister of SANDRO HIT and DIAMOND HIT and, uniquely, these two famous stallions are ranked in the World Breeding  Federation for Sport Horses (WBFSH) top ten stallions. She is the full sister of the influential Royal Hit who is the sire of Royal Dorito and many top horses in USA and Australia. Their mother LORETTA is thought to be the most influential mares of her generation WORLD WIDE

Loretta Live is the mother of SUPER MARIO (For Compliment) the very successful ride of Marianne Helgstrand noted for his great beauty and his powerful and elastic gaits.

When the now famous rider of FRANKLIN,  Severo Jurado Lopez, told me how excited he was about Franklin, I immediately pricked up my ears. He said his movement was unbelievable. ‘When you think he is fully extended then there is another gear.’ I knew Franklin was what I was looking for and used him three times last year and five times this year and he has totally fulfilled my hopes and expectations.

Franklin needs little introduction and was the KWPN Champion 2013.

He is a beautiful, modern stallion who combines trainability with performance. Franklin is incredibly uphill, with a hindleg showing abundant power, push and spring. He has a phenomenal, powerful canter, which he passes on to his offspring and has been awarded a score of 10 for his trot and 9.5 for his canter, as well as 9 for rideability. Franklin is a young stallion on whom many people place great expectations. His foals show great potential.

His offspring have inherited his spectacular gaits and great movement, with active hind legs and a strong top line. In the Nordic International sales the top six foals all by Franklin were sold with spectacular prices from 50,000 euro to 115,000 euro.  This reflects the immense talent and quality he passes to his foals.

Please feel free to contact us for more information on “Fitzgerald Caledonia”, and we will reply as soon as possible.