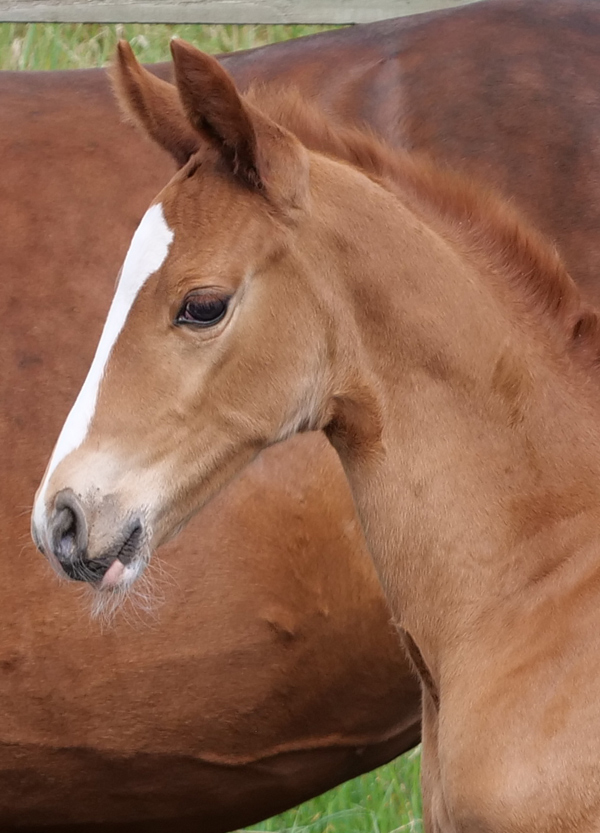 Well what can we say? This beautiful filly has captured our hearts. She is following some very big footsteps in her older sister SHADOW FAIRY who has qualified for RASTEDE. We have found this cross of our beautiful SUGAR PLUM FAIRY with FOUNDATION to be so exciting and represents the third generation of breeding at Caledonia.

Her mother, SUGAR PLUM FAIRY, has captivated us since the day she was born with her great beauty. Plum in her short career has five Regional Championships  and was twice a close third at the Nationals with high scores. She has had scores of up to 77%.  We are excited about her future and her foals are as beautiful as she is.

nterestingly from a breeding point of view, she is SIR DONNERHALL /DON SCHUFRO. This is the much admired breeding on the bottom line of the pedigree’s of Fascine, For Romance I and II, Feinrich, Dante Jr and Total US. Plum is also the full sister of our much admired Scarlett Caledonia.

We believe FOUNDATION to be one of the great dressage stallions of his generation and he is fast developing a dynasty of his own, as well as an outstanding record at competition with this rider Matthias Alexander Rath. Foundation is a large-framed, immensely powerful stallion who is incredibly supple with elastic, uphill, and ground covering paces. The mechanics of his gaits are exquisite; at his performance test, he scored a 10 for both his trot and his canter. Internationally victorious he is a sire who transmits amazing paces!

Provided with an exceptional charisma, Foundation has big movement with his hindquarters working perfectly under the centre of gravity, a wonderful uphill canter and a fantastic temperament. He finished his stallion performance test with dream marks between 9 and 10. In 2016, he achieved his international break-through: With Matthias Alexander Rath, he is constantly victorious at Prix St. Georges and Intermédiaire I level, for example in Jerez de la Frintera (ESP), Nice (FRA), Majorca (ESP), Valencia (ESP), Mannheim and Wiesbaden (GER). In 2012, Foundation was awarded the main premium I-a for stallions with an emphasis on dressage in Vechta. Numerous descendants have been sold for top prices at foal auctions in Vechta and Verden, many of his sons are licensed and premium stallions, his first descendants have often been victorious in dressage classes and many of them have been highly placed at the final of the German national Championships

Please feel free to contact us for more information on “Fire Fairy Caledonia”, and we will reply as soon as possible.