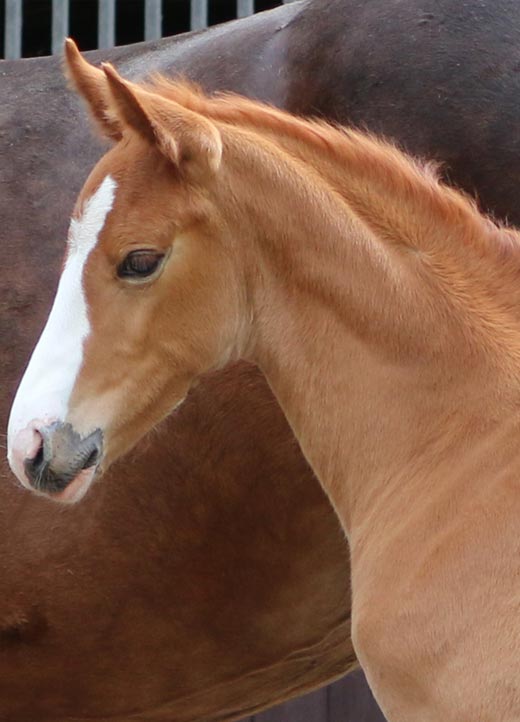 This a son of our superstar SCARLETT CALEDONIA who took our breathe away from the moment she was born. He is a great replica of his mother with his spectacular movement and eye catching colour. He has movement, bloodlines and type of international quality.

It is no secret that at Caledonia we rate FOUNDATION as a superior sire who brings great quality to the foals he sires. FOUNDATION is a large-framed, immensely powerful stallion who is incredibly supple with elastic, uphill, and ground covering paces. The mechanics of his gaits are exquisite; at his performance test, he scored a 10 for both his trot and his canter. Competing with his rider Matthias Alexander Rath, he has had great success internationally at PSG AND INTER I AND II and has made the step up successfully to Grand Prix. Through his offspring, he has created a dynasty.

His mother SCARLETT is a full sister to SUGAR PLUM FAIRY, and is on the verge of starting her own competition career with an International young rider. Plum in her short career is a multiple Regional Champion and was a close third twice in the Nationals She has had scores of up to 77%.
Interestingly from a breeding point of view, SCARLETT is SIR DONNERHALL /DON SCHUFRO.  This is the much admired breeding on the bottom line of the pedigree’s of Fascine, For Romance I and II, Feinrich and TOTAL US.

Her great  grandsire, FRIEDENSHERR, is by WANDERER, giving  the same sought after click of DON SCHUFRO and WANDERER as World Young Horse Champion UNA DONNA UNIQUE and many others.

Please feel free to contact us for more information on “Fire Dance Caledonia”, and we will reply as soon as possible.