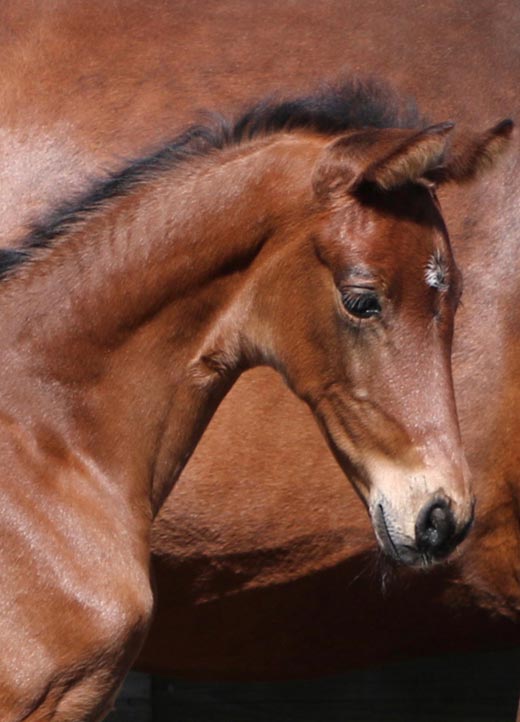 FAIRYTALE is a moving machine as we would expect from the movement maker FRANKLIN and this world class pedigree.

Uphill and elastic all in the most beautiful and correct model. She has a hind leg to dream of which is quick and carrying. It produces great elasticity and powerful suspension in all her paces. As can be seen from the photos and video, she has the coveted trot where the hind leg and front leg match. This very pretty feminine filly who has a world class pedigree which delivers on every level.

FRANKLIN needs little introduction and was the KWPN Champion 2013. The offspring by Franklin show high dressage potential. His offspring have inherited his beautiful expression and great movement with active hind legs and a strong top line. Several of his offspring have sold for top prices; one of them is Faretti DWB (Franklin / Don Frederico), who was awarded DWB Champion Dressage Filly 2017 and sold for 150.000 euros in the Nordic International Sales during Equitour Aalborg in 2017. In 2016 Franklin also sired the DWB Champion Dressage Filly, Francisca Lightfoot and in 2018 the full sister to Faretti DWB, Faretti II DWB was sold for 102.000 euro in the Nordic International Sales.

He is a beautiful, modern stallion who combines trainability with performance. Franklin is incredibly uphill, with a hindleg showing abundant power, push and spring. He has a phenomenal, powerful canter, which he passes on to his offspring and has been awarded a score of 10 for his trot and 9.5 for his canter, as well as 9 for rideability. Franklin is a young stallion on whom many people place great expectations.

Franklin is fast making himself a serious reputation for producing foals of exceptional movement and elasticity. His foals break price records in the auctions.

FAIR CALEDONIA (FAIRY) Our beautiful Fairy is by the famous stallion FURSTENBALL and out of DONNER DAYLIGHT whose father is BLUE HORS DON SCHUFRO, a competition and breeding legend.

Her grandmother, WALESKA, who carries the wonderful blood of the famous and influential stallion, WERTHER, was a full sister to the stallion WERTHER’S AS. Fairy’s mother’s Sir Donnerhall sister, Suilven, was mare Champion at the British Warmblood Breeder’s show and on the Lottery Funded World Class training programme for horses with International Potential. She is training towards Grand Prix and showing great talent.

Half sister to VIVA CALEDONIA and REMARKABLE CALEDONIA.

Please feel free to contact us for more information on “Fairytale Caledonia”, and we will reply as soon as possible.